SOHO Expo 2020: The First In-Person Trade Show of The Year

Many industries were impacted by COVID-19 in profound ways this year. Trade shows definitely fell in that category. Up until SOHO Expo, every trade show was either cancelled, rescheduled or held virtually.

As SENPA’s Board of Directors and Staff made tough decisions to cancel both SOHO Healthfest and SOHO Road Shows earlier in the year, they knew that if they could put on SOHO Expo in a safe manner, they had to do it.

By working closely with The Gaylord Palms Resort and Convention Center, The Expo Group, and paying close attention to federal, state and local guidelines, SENPA was confident that they could put on a safe and enjoyable show.

This show marked the first and only in-person natural products trade show of the year. It was also SOHO Expo’s 50th annual event.

Each party involved in the planning of this event took the utmost intentionality and care in creating protocols and being creative in new ways to hold in-person events that still allow for networking but also allow for social distancing.

Below is a photo journey of how SENPA implemented their health and safety features throughout the event as well as some show highlights. 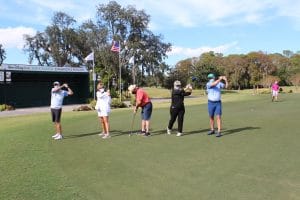 Each year, SOHO Expo kicks off with the Alan Kristowski Memorial Golf Tournament. All golfers wore masks when in the club house and during registration outside. Once on the course, golfers were allowed to unmask but were asked to socially distance from one another. 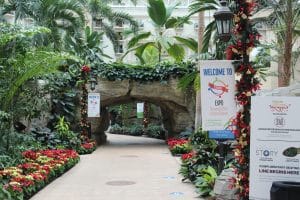 The host hotel, The Gaylord Palms, did a phenomenal job implementing safety protocols. Mariott’s Commitment to Clean initiatives created a safe environment for all guests. One of their numerous protocols included all of their employees getting temperature checked when arriving to work each day. Masks were mandated in all areas of the hotel unless actively eating or drinking while seated or while swimming. 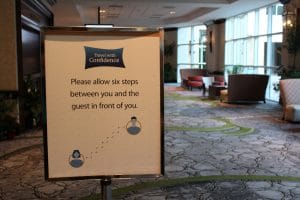 Social distancing reminders as well as hand sanitizing stations were located throughout the hotel. 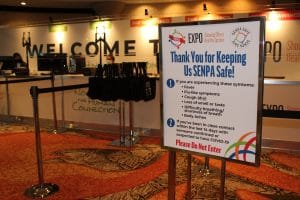 SENPA had signage around the registration and show floor reminding people to follow their “SENPA Safe” protocols. 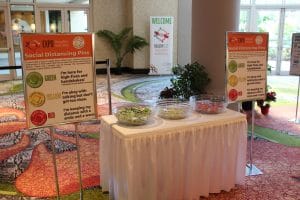 One of the favorite safety features at SOHO Expo was the social distancing pins. These pins allowed for attendees and exhibitors to indicate their comfort level around other people. Green meant, “I’m here for high-fives and handshakes (with lots of hand sanitizer, of course). Yellow meant, “I’m okay with talking but don’t get too close.” And red meant, “I’m keeping my distance with a smile and a wave.” 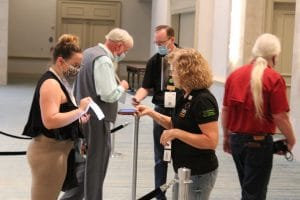 SENPA went contactless wherever possible. Check in for all education sessions was done electronically. 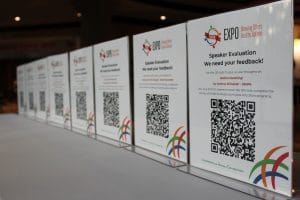 One of their initiatives was online speaker evaluations. Each education session had a unique QR Code that linked to a survey for the session. 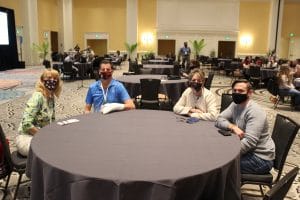 At the education events and meal functions, seating was reduced from the usual 10 per table down to 6. All meals were served by hotel staff behind plexiglass. Attendees wore their masks when they were not actively eating or drinking. 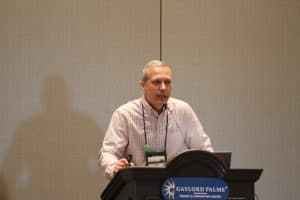 All speakers wore masks walking to and from the podium and removed them once they started to speak. Pictured is Dan Chapman of Redd Remedies. 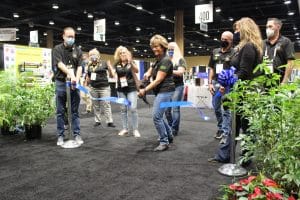 To limit a large crowd of people gathered outside the entrance to the show floor, the ribbon cutting was held inside the exhibit hall. Retail attendees were scattered along the wall to promote social distancing. Pictured is the new SENPA President, Renee Southard, cutting the ribbon and the Board of Directors showing their support behind her. 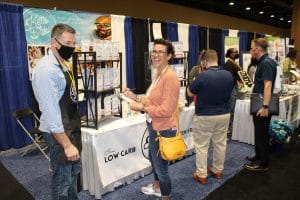 For those with medical concerns, face shields were permitted. 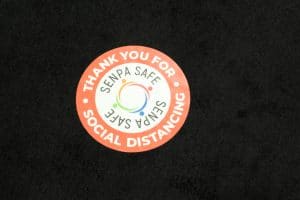 Social distancing stickers were placed throughout the show floor to serve as reminders for attendees to keep their distance. 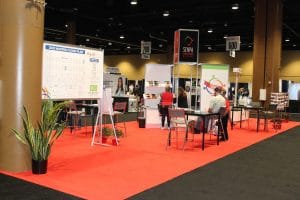 Since it was SOHO Expo’s 50th anniversary, there were old photos throughout the show floor and at the SENPA booth commemorating the history of the show. 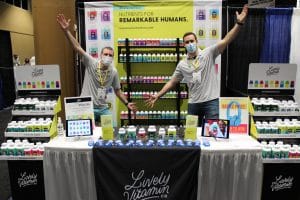 There were numerous exhibitors that decided that SOHO Expo should be their first trade show in the history of their company. 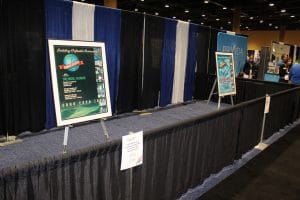 When possible, booths were left intentionally blank to allow for more space for people to gather at booths. 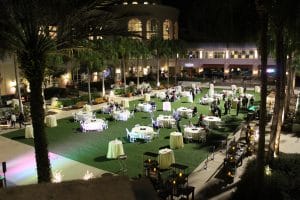 The President’s Party was held outside this year. Tables were spaced out throughout the lawn and the food stations were spread out to limit crowds. Again, all food was served by hotel staff behind plexiglass barriers. 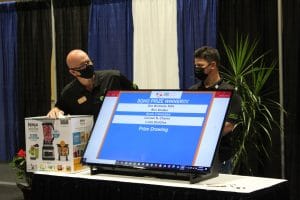 Each day the show floor was open, SENPA raffled off prizes. In previous years, there were physical prize tickets. This year, they utilized scanners for digital entries and the prize drawings were done electronically. 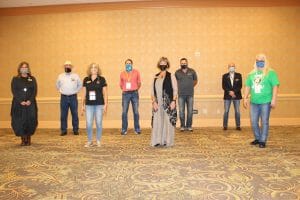 Upon the completion of the show, SENPA sent out surveys to all attendees to ask for their feedback on how to improve the safety of the show as well as get their overall feeling of how the show went for them. The results have been overwhelmingly positive.

On behalf of all the SENPA Board of Directors and Staff, thank you for the faith in our association to put on a safe and beneficial show for everyone.

SENPA is a non-profit organization with a core focus on strengthening the success of independent natural retailers and aligned manufacturers, while nourishing their human connection with consumers. We are a leading voice, supporter and advocate for the natural-products industry, rooted in the experience of enhanced health and the power of personal relationships.

This site uses Akismet to reduce spam. Learn how your comment data is processed.