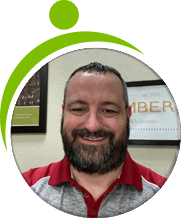 Jeff started in the natural products industry back in 1998, when he took what he thought was going to be a college summer job working for Akin’s Natural Foods.  At the time the chain was owned by the Hinkefent family and had 5 locations which allowed him to learn the business from the inside.  After a few years he became the store manager at the headquarters location in Tulsa, OK.  When the chain was sold to Food for Health Distributing, he had the opportunity to move to Florida to run another banner they had also recently acquired, Chamberlin’s Market & Café as the operations manager.  He returned to Tulsa when he had the opportunity to become the Director of Purchasing for the company.  In 2020, Jeff was promoted to Vice President of Purchasing for The Healthy Edge Retail Group which now operates 3 banners of health food stores, Akin’s Natural Foods, Chamberlin’s Natural Foods, and Earth Origins Market (acquired in 2018).  He also recently completed his Bachelor’s degree in Business Administration through Northeastern State University graduating in December 2020.    Jeff resides in Oklahoma with his wife, Emily, and kids, Lauren, Jaedon and Rhett.